EXPLORE NEAR BY REGIONS 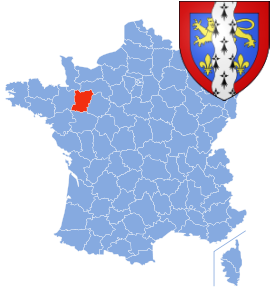 The Mayenne department is made up of a list of communes all set within the Pays de la Loire region of north-western France. It is situated on the river Mayenne.

Le Moulin is located in the Craon commune which accounts for a population of almost 5,000 inhabitants. Craon makes up part of the Pays de la Loire region, within the Mayenne department.

Situated close to important towns and cities such as Laval, Angers, Rennes and Nantes. Its beautiful castle dating of the 18th century and its park attract more than 15,000 people every year.

Its racecourse is a partial explanation for Craon's fame in the whole of France. Competitions are highly followed by horse lovers. The priory of Saint-Clement and its rose garden, the covered market, a renovated centre punctuated by pretty half-timbered houses are other elements added to the previous ones which make of Craon a town where tourism is more and more developed.

Many other facilities have been developed by the town, such as sportive and leisure equipment. Cultural equipment is planned to be even more developed, with the creation of a theatre and a multimedia library.

Chateau-Gontier is situated on the river Mayenne. This town is nationally renowned for its gardens and floral displays.  The town has many shops and restaurants, plus retail parks.  The river has towpaths that can take you hundreds of kilometres along the beautiful banks of the Mayenne.  You can hire boats or moor your own.

The annual comedy festival in Cosse-Le-Vivien always pulls in the crowds.  Art lovers won’t be able to resist a trip to the Robert Tatin museum whose distinctive sculptures have inspired many.

Laval is a lovely interesting town, which offers all facilities from restaurants to shops and great retail parks, culture, arts and theatre.  From here Paris is accessible in two hours via the TGV and you can set foot in London in just four hours.  Laval is situated on the river Mayenne and also has a vibrant medieval quarter.  Shops, restaurants, retail parks, and lots of green areas.

Laval Transport links: the town is ideally situated. The A11 motorways gives a direct link to Paris. Travel by train: TGV high-speed trains let you reach Paris in 1h30 or London in 4h30. Rennes airport is 1hr away, Nantes airport 1h45 away, offering budget flights to the UK.  Laval also has a private aerodrome open to business travellers.

Markets - you like markets??  Then you'll love the medieval market town of La Guerche de Bretagne(19km), held weekly, is one of the largest markets in France.  This town is so old it is even mentioned in the French equivalent of the Domesday book!  This is only one of the many markets held in our region.

One of the real charms - and a huge benefit of this area, is that you are on the borders of four departments.  From the South Mayenne, you are just kilometres from Maine et Loire, Loire-Atlantique and Ille et Vilaine. Therefore, you are within reach of the university town of Angers, with its famous chateau, apocalypse tapestry and Cointreau distillery which awaits the bons viveurs amongst you.  The superb coastline and beaches of the Loire-Atlantique, including La Baule, are within reach for a good day out.  Likewise, if you prefer the more rugged coastlines, then head north to St Malo or perhaps the Pink Granite coast.

If further proof were needed of just how close to the borders you are, visit the racecourse at Senonnes.  The race track itself starts in the Mayenne, enters Ille et Vilaine with the finish line back in the South Mayenne again!

Vitre The old town has a very large number of lovely colombage (half-timbered) houses, and is one of the few places in France where you can see a complete gothic style town. There are also numerous cafes, bars, shops, retail parks, a fabulous chateau  and more. Including a train station.

Chateaubriant there’s no better place to try a Chateaubriand steak than this medieval market town.  Historians differ; some believe the name is a reference to sirloin steak served in a reduced white wine and shallot sauce though others believe it is a reference to the renowned, flavoursome cattle raised around the town.